My 2019 video editing reel. The majority of the work that I've done over the past several years hasn't been anything in which I've operated camera, and most of it was under intellectual property ND. So in lieu of a normal, annual reel, I've put together a little something highlighting some of my general skills and interests in audio/video creation, even though the focus of it is the editing nature.

Posted by Unknown at 2:29 PM No comments:

A big hit, and rightly so. This is a video that I created from a Bandhub "collab" in which I was recruited for lead vocals, and to which I contributed other audio FX. The project (started by another member) turned out so well that I simply had to make a video presentation of it, and so here it is:


To gain a better perspective on how this video was created, take a look at the original "collab"
here or here's a representation of the original video:
... and then a time-lapse video of my process in creating a similarly-styled video, but from a much smaller project:


These videos can take anywhere from 6-24 hours, depending on their size, complexity of moves, background footage, video FX, and whether or not I create an entirely new audio mix.
Posted by Unknown at 5:07 PM No comments:

My Musical Progress and a Return to After Effects

After Effects is a fabulous program, and I'm glad I've reintroduced myself to it. I'm still rather amateurish in my use of it, but I believe that I've progressed in different aspects with almost every video. Some I do admit are boiler plate standards that I've invented and have employed just to get a collab that I'm proud of out for people to see, and especially to hear.

I'm not a great vocalist, but I think I'm fairly decent. And it's truly an enjoyable hobby.

Since my previous post (about 5 months ago)I've done considerably more songs, and created quite a few videos. I'm at over 130 "collabs" currently, and have released nearly 40 videos of those songs.

Here's a few of them that I've liked in particular. As always please click the title, rather than the image, and you'll get a full-screen view. It's always nice to see the details up close :)

PINK FLOYD - WAITING FOR THE WORMS (from the album and motion picture)
In this video I recreated the Gerald Scarfe animations. I did this by ingesting the original videos into After Effects and then layering my own images over it, and then frame-by-frame matching the movements and angles, and a reasonable facsimile of the imagery. I've also included a link to a YT video of that segment (on another person's account) just so you can do a comparison, here (it's set to start at the beginning of the mimicked animation:
https://youtu.be/0bDY0DfEjmo?t=1m19s

Posted by Unknown at 2:28 PM No comments:

It's been a while since I've posted anything, especially since most of what I work on is proprietary, nor is it my own camera work, and therefore not really legitimate to post.

However, in my spare time I've been doing a bit of singing on the social network called Bandhub.  I joined in October of last year, and have at this point been involved in nearly 40 "collabs".  I'm beginning to get in fairly high demand for doing lead vocals, and it's pleasing to know that people have confidence in my musical vocal abilities.

Other than singing though, I can contribute scarcely more, as I don't play any instrument.  But I've found a different way to contribute and that is to take the "Brady Bunch" view that you get from a finished collab, and using the raw materials I create a slightly more interesting music video that the participating artists might use to promote themselves hither and yon.

Here's what I mean by Brady Bunch view: 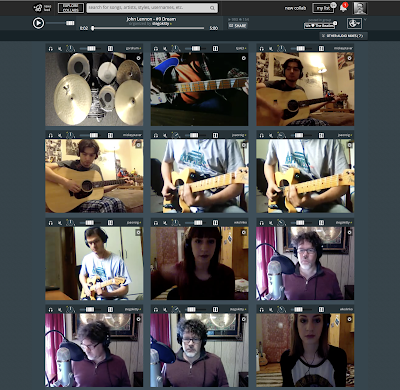 There's actually another equally-sized image of the rest of the participants in this particular collab, but this should suffice for you to get the idea. And the final product ...

As always, please click on the broken rectangle icon at the bottom right of the YouTube video screen to make the video full screen, and when it's done, simply press Esc on your keyboard.

I've made several other videos, not only of the collabs in which I've participated (though that's my primary MO), but I've also been so thrilled with the performances of other BHer performances that I've volunteered my services.

And now I'm beginning to get requests for those, but unlike playing or singing in a collab, these videos can take anywhere from 4.5 to 6 or more hours to create, depending on their complexity.

But anyway, it's a lot of fun -- both performing the music and creating the videos.
Posted by Unknown at 10:22 AM No comments:

Intro to the full wedding video, of the wedding of
Daniel & Natasha, held at the Five Bridge Inn.
Nick Kane was on 2nd camera.
It's (as usual) a three-camera shoot, which I edited,
as well as Blu-Ray disc authored and published.
Posted by Unknown at 12:07 PM No comments:

Since virtually everything I've been working on lately is confidential, or something that my position  in the production was not directly involved with either shooting and/or editing, I either am not permitted to post it, or it wouldn't be reflecting any of my personal skills. So I'll just post a little video I did for fun instead.

As always, be sure to click on the title in the upper left to open the video in a new page and from there you can click on the icon in the lower right to go full screen. Turn it up!
Posted by Unknown at 3:11 PM No comments:

Another fun performance by the students of St. Andrew's School. Into The Wood.


Into The Woods (trailer) - St. Andrew's School from Shawn Hare on Vimeo.


With the exception of operating Camera 2 (Nick Kane) I did everything else: editing (including footage from the next evening's performance to cover up a major gaff in the production), DVD authoring, and production of all accompanying artwork.
Posted by Unknown at 3:59 PM No comments: